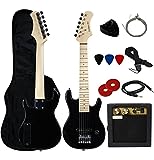 Electric guitars are really fun to play. Especially kids who are a lot into rock n roll and alternative music will adore that type of guitar for sure. Nevertheless, there are a few things to consider when getting one. In the following we’ll tell what’s the right age to introduce a child to an electric guitar and if it’s really a good alternative to acoustics. Last but not least, we’ll recommend you some good electrics for kids in different sizes.

The right age for an electric guitar 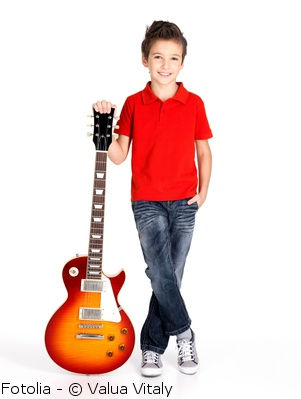 I wouldn’t recommend  a small electric for kids younger than 6 years for a simple reason. First of all, there aren’t really electrics in smaller sizes. Most of the electric guitars offered for youth and kids are 3/4 size and sometimes we can also find electric guitars in 1/2 size. There aren’t really any smaller electric guitars on the market and that make sense. Since an electric guitar doesn’t have a sound hole through which sound projects, it uses a pickup to convert the vibration of its strings into electrical impulses. The signal generated by this guitar would be too weak to drive a loudspeaker. So it needs to be amplified before sending it to a loudspeaker which is done by an amplifier. Theoretically, you can play it also without an amplifier but the sound would be very quiet then, just loud enough for the player to be heard if he is alone but not loud enough to play for other people. So that’s why an amplifier is a must-have when getting an electric guitar. Thanks to the amplifier you can adjust the volume, change the tone and add even some nice sound effects. And that’s definitely something that requires a certain age for kids in order to understand how to use an amplifier. In addition to that you should also consider that kid’s electric guitars can get very loud due to the amplifier. Kids may enjoy playing with the maximum volume their favorite rock tunes but would you appreciate it as parents too? Not so much probably. So get your child only an electric guitar if you can make sure that he is already able to handle an amplifier with its adjustments and that he would respect certain volume limits.

An alternative to acoustic guitar

If you have to decide between an electric and acoustic steel string guitar, the electric guitar is in most cases the better choice for children. Both use steel strings but acoustic steel strings guitars use thicker strings which are under a higher amount of tension. As a result, they are harder to push down and will hurt young children’s fingers quite more. However, even thinner steel strings, as used on the electric, will certainly cause a bit more discomfort on the fingertips than a classical guitar with nylon strings.

Unfortunately, electric guitars aren’t too often considered as an option for children. In most of the local guitar stores you can only find acoustic kid’s guitars with nylon strings for the reason as mentioned above. But that’s a pity because electric guitars are indeed an option for children. When deciding between a steel string acoustic or a nylon string acoustic guitar I would recommend always the nylon one because both of them are acoustic guitars and you can play with both nearly the same music styles. By contrast, electrics are associated with rock, alternative, metal and most pop music, whereas acoustic guitars are typically used for classical, country and folk music. If you have to make the choice between an electric and a nylon string guitar and your your child is at least 6 years old, you should select the guitar that reflects the musical interest of your child. Whether your child starts with an electric guitar or a nylon string guitar, his fingertips will initially become a little sore anyway. Electric steel strings do feel different on the fingertips compared to nylon strings but they don’t really hurt much more since they are thinner and easier to push down. With a little practice and time this slight discomfort and pain will quickly disappear.

The Squier by Fender Stratocaster Mini is the best small electric guitar for young players from 8 years. This youth guitar is really worth it’s money because it doesn’t just looks very high quality but also its the play feeling is awesome. This small electric guitar is also often sold to adults as a travel electric guitar. So even  when your child will outgrow this mini guitar he can still play on it without any difficulties and keep it as a travel guitar. I had the chance to test the Squier Stratocaster Mini and it’s also comfortable to play  for adults.