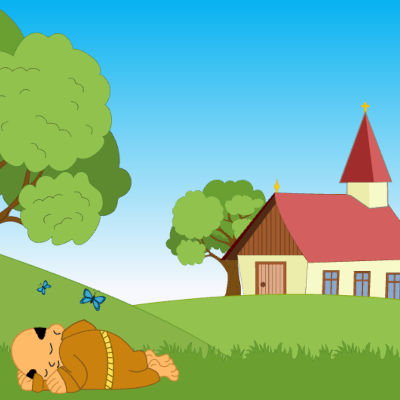 Frère Jacques, sometimes called Brother John in English is a French nursery rhyme which is known in most countries of the world. Learn how to play Brother John in a very easy version on your guitar. You find here the chords and tabs for this children’s song as well as the sheet music as free PDF download at the end of the article.

It has been originally composed by Jean-Philippe Rameau in the 18th century. Since then it has been translated in many different languages and it made it way into the world. There is a even a version in Chinese, Latin or Afrikaans. In most languages they have also changed the name. For example in German he is called Jakob, in Spanish Santiago or in Italian Martino.

Frère Jacques is a very easy guitar song for kids and that’s why it’s nowadays still quite popular in music lessons. Thanks to its simplicity it is often one of the first songs  when we learn playing guitar. Children like this nursery rhyme because it is short and the lyrics are easy to remember. There are different versions of it, but there is a really easy one for beginner. You only need one chord. This means that you don’t have to change any chord positions.

For the C chord we strum only the last five strings, which means that the first string is not played. Although, we don’t change any chords in this easy version, we do strum stronger when the lyrics is in bolt.

If you want to go to the next level you could try to finger pick the song. It is a bit more challenging but still quite easy to learn and a perfect exercise for beginner. You can download very soon the music sheet for free just below as PDF. It will contain the version in French (Frère Jacques) and in English (Brother John). You can use these sheets not for guitar notes only but also for piano notes.

Make your guitar lessons and playing more fun for kids! The Ebook Easy Guitar Songs For Kids features printables of the song Brother John/ Frère Jacques! Check it out! 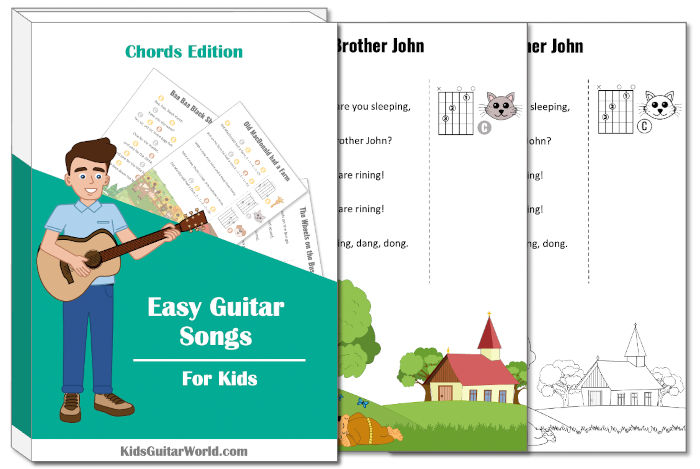