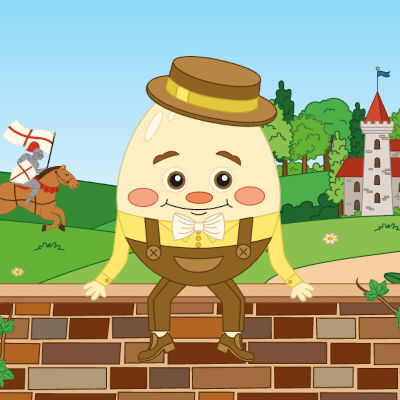 The origin of Humpty Dumpty as a term and as a nursery rhymes goes back a long time in history and there are several theories. Regarding the term Humpty Dumpty, one states that hat Humpty Dumpty characterized King Richard III of England, depicted as humpbacked in Tudor histories and particularly in Shakespeare’s play. Another interesting theory comes from the city of Colchester. They state that the origin of the rhyme is linked to a cannon used by the Royalist defenders in the siege of 1648. Back then, Colchester was a walled town and the story states that the large cannon was called Humpty Dumpty and was strategically placed on the water. However, a shot from a cannon of the enemy succeeded in damaging the wall beneath Humpty Dumpty, which caused the cannon to tumble to the ground. The Royalists (“all the King’s men”) attempted to raise Humpty Dumpty on to another part of the wall, but the cannon was so heavy that “All the King’s horses and all the King’s men couldn’t put Humpty together again”. There are also other theories, which can be further studied on Wikipedia.

The earliest version of the song has been published in 1797 with different lyrics. In the 19th century Humpty Dumpty has become a very popular nursery rhyme character The American actor George L. Fox (1825–77) integrated the character in stage productions of pantomime versions, music, and rhyme. Later, Humpty Dumpty also appears as a character in Lewis Carroll’s Through the Looking-Glass in 1871 as par of Alice in Wonderland.

The lyrics we use today for the nursery rhyme exists at least since 1954. Today, the Humpty Dumpty is also a common literary allusion, especially to refer to a person in an insecure position, something that would be difficult to reconstruct once broken, or a short and fat person.

Humpty Dumpty is for sure not the most famous song for guitar lessons but definitely deserves a place. Kids know the lyrics, it’s short and easy to remember. And last but not least, you can play with some basic guitar chords, A, D and E. It will require some practice because you need to change quickly between the chords but it’s a great exercise.

Once you master the chord version of the nursery rhyme, you can move forward learning the fingerpicked version. Therefore, you can either use the tabs or music sheet if you know how to read music. Reading music for those simple songs is in general not difficult and quite fast to learn. The PDF download is coming very soon.

Make your guitar lessons and playing more fun for kids! The Ebook Easy Guitar Songs For Kids features printables of the song Humpty Dumpty! Check it out!