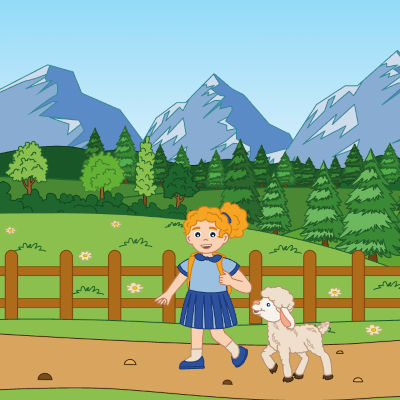 Mary had a little lamb is one of the most popular and well-known English nursery rhymes from the 19th century with its origin in the US. It’s actually a pretty nice song because it has a nice background story and teaches kids about moral.

The nursery rhyme has been written as a poem by Sara Josepha Hale and it has been first published in 1830. Just a bit after, Lowell Mason set the nursery rhyme to a melody adding repetition in the verses. And a little fun fact: Mary had a little lamb was the first audio recorded by Thomas Edison when he invented the phonograph in 1877, followed then by the second recoding of the famous traditional French song Au Clair de la Lune.

It’s likely that the author of the rhyme has been inspired by an actual event. And the real story starts even before where nursery rhyme begins. The nine-year-old Mary helped her dad on his farm where they discovered one day a sickly newborn lamb that had been abandoned by her mother. Mary wanted to take care of the lamb but her dad was not happy about this idea. After a lot of pleading, she was finally allowed to keep the lamb and was able to nurse the lamb back to health. And that’s why the lamb followed Mary everywhere where she went.

It’s said that the story of the nursery rhyme has been taken place at a small school in New Hampshire. Sara was working at that school and was surprised one morning that a little girl called Mary came to school with her pet lamb. The lamb couldn’t remain in the class room and had to wait outside. When Mary finished school, she went to her lamb outside and the lamb was running to Mary. The other young kids asked the teacher why the lamb loves Mary so much and she just replied because Mary loves the lamb. So, it’s about giving and taking, and mutuality.

So why is this nursery rhyme still so popular? Well, because first kids just love it and some musicians have picked it up to perform it or to do their own interpretation of it. And last but not least, it’s a very popular song in music classes when it comes to teaching musical instruments. It’s short, it has a simple melody and consequently it’s perfect for beginners on any instruments. You can play it on guitar with only two basic chords, G and C.

The easiest way to play a new song on the guitar is the usage of guitar chords and to strum them. But once you are good in playing chords and strumming, it’s time move to the next level, which is finger-picking. We will soon provide the music sheets and tabs for the Mary had a little Lamb.

Mary had a little Lamb Printables

Make your guitar lessons and playing more fun for kids! The Ebook Easy Guitar Songs For Kids features printables of the song Mary had a little Lamb.