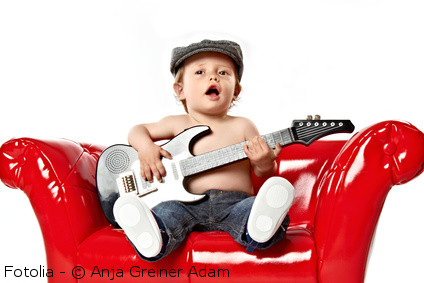 Can we say the earlier we introduce our child the guitar, the better since the brain is still developing and has a lot of flexibility?  It’s definitelty not wrong to introduce already a toddler to the world of guitars. And with the world of guitars I refer also to toy guitars which are often unconsidered when talking about guitars for toddlers and young kids: Toy Guitars. Depending on the age, a toy guitar can be the much better choice than an actual guitar.  There are even toy guitar for babies that can stimulate quite well a child’s interest.

The advantages of Toy Guitars for Toddlers

An actual guitar is not a toy. If you have already a guitar at home, you can give it a try. Let your child try to strum strings or some chords (help your child by pressing down the chords for him). However, it’s quite likely that you’ll see your child playing around 10 minutes and then the magic of the guitar is just gone. Even if you have a small body guitar, such as a 1/4 guitar (the smallest one you can find on the market for kids), the instrument will be first of all too large for a toddler. In addition to that, a child under 4 years doesn’t have the required concentration to learn an instrument properly and that’s why I don’t really like to consider an actual guitar for the little ones.

Buy on Amazon
For Girls
aPerfectLife

Buy on Amazon
For Toddlers
Einstein

Nevertheless, there are good alternatives for toddlers who already admire the guitars: various toy guitar. You can find a lot of toddler guitars for boys and girls on the internet (some are really good ones and others with a quite poor quality). A good toy guitars is a nice introduction to the world of guitars. They enable even the youngest kids to explore the shape of that instrument and its main part (neck, body, head, soundhole), as well as the typical guitar sound.

One of the most important thing is that even a toy guitar makes your child feel like a little guitarists and that’s what really counts since this keeps up the motivation. Your son or daugther will have a sense of achievement. Moreover, some toy guitars for toddlers support the brain development and motor skills and hand-eye coordination.

Toddlers love coloful and shiny things. They like to press buttons and explore the results. Toddler guitars are focused exactly on these things. They are available in a variety of colors and in different designs featuring for instance famous cartoon characters. It won’t be even hard to find a shinny pink guitar for girls. They also feature a plenty of easy-to-use buttons to create sounds.

Good toy guitars are without doubt quite cheaper than actual instruments. For around 20-40$ you can already find a great toy guitar. Let me present you in the following some toy guitars for every age. 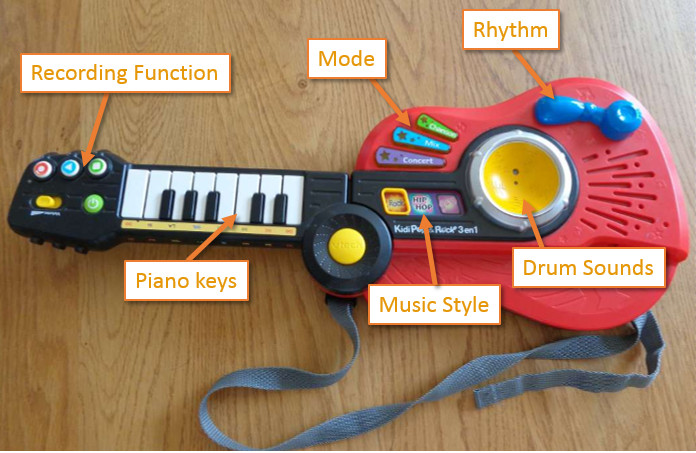 The VTech is actually more than just a toy guitar. It combines several musical instrument toys in one – guitar, piano and drums. However, the main instrument is the guitar since it dominates the shape of this toy. You can switch between different music styles (rock, jazz and hip hop) as background music. There is then the possibility to chosse either the song, jam or concert mode. The piano keys cover music notes and sound effects. The child can slide the blue swing button on the body to add effects or rhythm. The yellow circle on the body is actually a sensor which captures the hand move of the player in order to add drum sounds. You see this little toy instrument has really a tons of functions for endless hours of playing. Another nice feature is the recording function that allows kids to record and to replay their own riffs. The Vtech has also a volume control which is really useful in order to avoid too loud noises. It is also equipped with a guitar strap, so that your child can perform like a rockstar. In my opinion this small todller guitar is definitely worth the money and the best one you can find on the market for kids from 3 years. 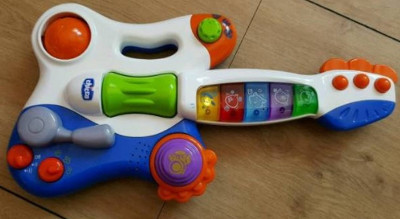 This electrical toy guitar is pretty similar to the VTech but much more simplified and so sutiable for younger toddlers. The toddler can choose between different music styles (pop, rock, blues), three different play modes and mix various sound effects to it. Unlike the Vtech, this small guitar doesn’t have neither a volume control nor guitar strap. But for that it costs just the half and it helps children to develop a sense for rhythm and music as well. The same toy guitar is also available as a girl version in purple. 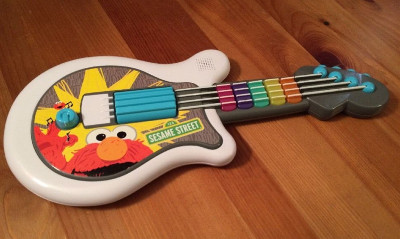 This little Sesame Street Elmo Guitar has got only six buttons with pre-set guitar sounds and a volume control. So, this toy is pretty simple and quite handy. If your child is older than 3 years I would definitely recommend to get the VTech since it has much more functions which allows to go much further with in terms of creativity. However, for toddlers under 3 years this one is a good introduction to the world of guitars.

If you are looking for a good toy guitar for a baby then I recommend you the toy guitar from Einstein. The guitar head includes a rattle ball that activates melodies when spinning it. The baby can use the buttons in order to play one of the 10 little melodies and activate lights. This toy is one of the best toy guitars you can find for little babies from 3 months at a fair price.